TYPOlight version 2.7.RC1 is available. Please do not use beta versions for productional websites! Download the release candidate to check whether your website or custom extension needs adaptation.

The most notable change in version 2.7 is the collapsible two-column form layout, which highly improves the usability of the TYPOlight back end. Check out the video below for a short demonstration. 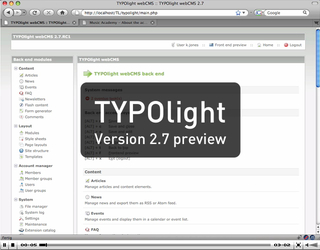 How to adapt your own extensions to the new form layout

Adapting your own extensions to the new collapsible two-column form layout is not difficult at all. The input fields are arranged using the CSS "float" command, so all you have to do is to assign classes in the data container array. Take a look at the code or read the description in the developer's guide.

Read the chapter in the developer's guide

From version 2.7, TYPOlight uses salted passwords to protect against rainbow table attacks (a rainbow table is a lookup table to recover plaintext passwords from password hashes). Existing passwords will be salted automatically during the login process. Please note that this is just a preventive measure and not a security fix! TYPOlight is a secure application and salted passwords will help so this does not change in the future.

The "importUser" hook is triggered when a username cannot be found in the database. It allows you to insert your own authentication routine and to e.g. import a user from an external database or LDAP server.

More about the "importUser" hook

Version 2.7 includes some template modifications that were announced in the forum. Please read the announcement carefully, because the changes this time affect all existing installations!

When to expect the final release

I have named version 2.7 the "spring cleaning release", because a lot of deprecated stuff has been removed and a lot of things have been overworked. Besides the new collapsible two-column form layout, which requires to adapt over 150 third party extensions, all language files have been updated, so all translations need to be checked, too. I assume it is going to take another 8 to 12 weeks until most of the work has been done.

In addition, there are still 45 open feature requests and although not all of them are going to make it into version 2.7, some important changes like the mootools 1.2 update are yet to come. I expect at least one more beta version (RC2 and probably even RC3) before the final release, so June 2009 seems realistic.

Find out what has been done so far

You can check out all tickets belonging to the new version here.